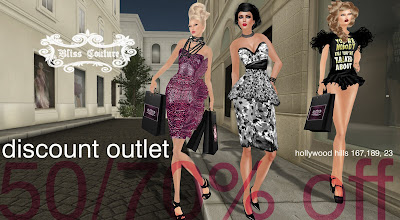 The luxury house has added 12 new designs to its Outlet.

Bliss Couture is growing. After the opening of its 3rd Sim, Dress, beside the original location at Hollywood Hills, its flagship store at Gown and the month of the celebrations for its 3rd Anniversary, the label presented yesterday 21 of its most beautiful haute designs and a preview of some of the gowns that will be released in the next week.

In the attemp to offer only the newest designs to our customers we moved many items in the Outlet Sim and we preferred to offer them to a reduced price, up to 70% off permanently, instead of discontinuing them as they are being successful and requested after years from the day when they've been released.
Many Dolls loves our signature designs presented even two or three years ago, and in the outlet they will find both new creations and timeless pieces to a really incredible price forever.

Bliss Couture is stunned to have over 34000 members, including both the inworld group and the subscriber, and is proud and thankful for the continued support and friendship during the past three years. You all made this possible.