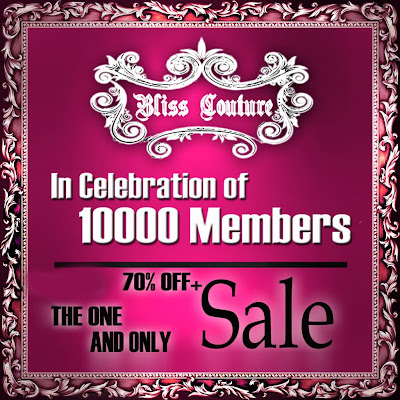 Dear Dollys
Thank you for all the Lovely IMs/Thank you Notecard and LOVE!! I've got a plently of Ims requesting me to Extend my sale, sooo......The 70% Off Member Appreciation Sale will Extend for 3 days (FINAL!!)
I've made a Spring Color Collection for our Fav Lovena Gown (70% OFF) (In order to acquire the gift one must wear the Bliss Couture group tag and click buy on the gift for $1L.)
Bliss Couture Mainstore @ http://slurl.com/secondlife/Gown/145/139/282
Luv ya All! Thank you for all the love and support, I can feel them and you gals made me feel like the LUCKIEST GIRL in SL!! Thank you AGAIN!

Posted by amutey No comments:

I am Very Proud to be part of the team this time :)
My 3 latest releases, Based on the theme "Elements - Fire, Water, Earth and Air."
Only Available NOW @ http://slurl.com/secondlife/Black%20Swan/22/48/21 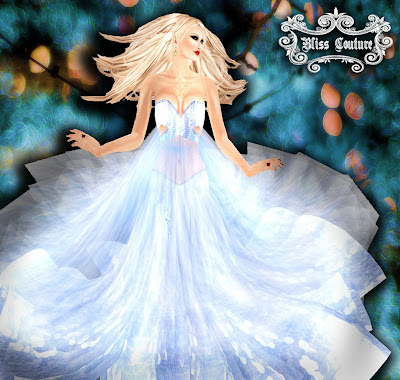 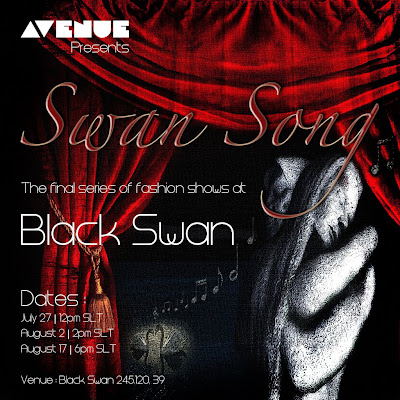 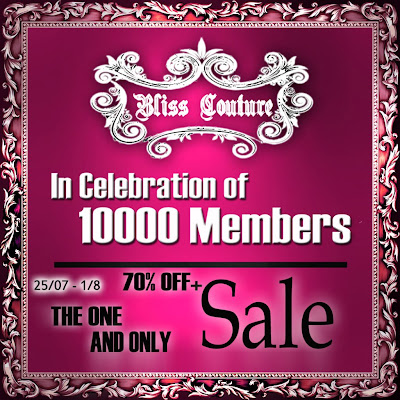 Letter to my Dolls

Starting from Today to 1st Aug will be "Bliss Couture Dolls Appreciation Week". I want to express how much I appreciate to each and everyone of you. I started Bliss Couture at March 2008, a little bit over a year now and we've now 10,000 members. (in-world and subscribe-o-matic) It's like a Dream, without you girls, I will never have what I've now.

My deepest Thanks to everyone who supports me, encourage me, help me ,love me and stand by me.

Everything will be on 70%+ Off, All gowns will be under 199L and Dresses under 99L(Eve and Wedding Gowns are exceptional)
I've prepared 3 gifts for you thru out the week 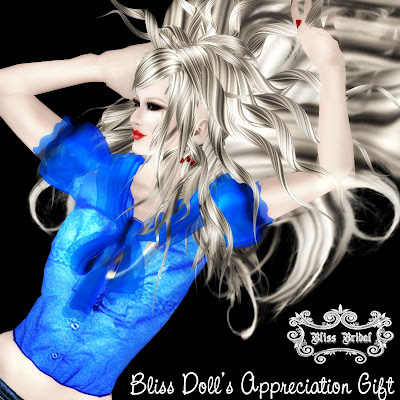 (In order to acquire the gift one must wear the Bliss Couture group tag and click buy on the gift for $1L.)

Again, a BIG Thank you to alll of you, I wish I can find a better word to express how i feel.


(P.S. BIG Special Thanks to 3 of my Girls, Caymon Zhora, Izzie Rexen and Lovena Allen, who are always there for me)

Posted by amutey No comments:

Wow! This stunning head turner will definately help you make a statement when you walk in wearing it. A sexy bandaeu top with shimmering highlights which accent your curves sets the alluring appeal of this gown. A side slant draws the focus to the unique skirt which also drapes to the opposite side while showing off your hourglass shape. With a sassy hip ruffle on the left and a flowing skirt on the right, you`ll not only have all eyes on you but you`ll definately be on the best dressed list at any event you attend. This mouthwatering dress comes in several colors including...gold, blue, blue black, red, purple and green.

Posted by Lovena Allen No comments: 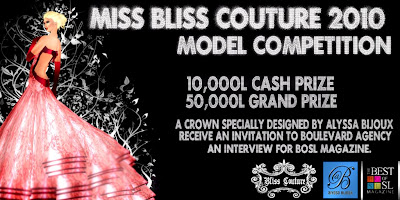 Would you like to win $10,000L, be seen as the "face" for a top clothing brand, and be featured in one of SL's most prominent magazines? If so read on to find out how this can be possible.

The search for Miss Bliss Couture 2010 has begun!

Entries will be accepted until July 30th so all interested models should quickly apply. We are calling every beautiful model and every classy woman who adores Bliss Couture clothing. Many women would love to be the "Face" of Bliss Couture and wear the title of Miss Bliss Couture 2010, are you one of them? Only ONE will be chosen as Miss Bliss Couture 2010 and that lucky lady will appear in most vendor ads for new clothing and will exclusively be the model in all print advertising for magazines and other media. Miss Bliss Couture will be given priority for all modeling jobs available, only being replaced in the event of her being unavailable. Miss Bliss Couture will be awarded a specially designed diamond jewelry set from Alyssa Bijoux. She will also be given all future Bliss Couture releases throughout her one year reign, $10,000L Cash Prize, and of course the title of Miss Bliss 2010. The winner will also receive an invitation to the prestigious Boulevard Agency and an interview for BOSL Magazine. With prizes like these who would not want to be part of a contest of this magnitude?


Miss Bliss Couture 2010 is a multi level competition based on photos, live modeling and objective judging. There will be no voting from friends the competitors will only be judged by the distinguished panel of judges chosen for the event.

The rules to the contest are as followed:

Step 1 - Join "THE BEST OF SL Magazine Readers" Group. All notices and results will be announced in this group only. All contestants also, have to join the Bliss Couture In-world Group to be part of this contest.

Step 2 - Models will submit photos of themselves wearing a dress or outfit from Bliss Couture. One full body and one headshot 512 X 512 (FULL PERM) each. Full body photos will be judged on styling, while headshots will judged based on the visual appeal of the model. Please send your entry in a folder (not a notecard) to Caymon Zhora. Label your entry MISS BLISS COUTURE 2010 (YOUR NAME).

Step 3 - 100 girls will be selected from these entries for a live audition callback. Models should again wear a Bliss Couture dress or outfit and style themselves in a way they believe represents the image of Bliss Couture. The live audition will include a runway walk and will take place over 2 live audition times so all girls will have a chance to be seen.

Step 4 - The pool will be narrowed down to 20 models from the live audition. Since the winner of the competition will be working closely with designer Amutey DeCuir, it is important that the girl herself show signs of reliability and be personable. An interview will be scheduled for each girl to gauge for compatibility between model and designer.

Step 5 - The pool of 20 will be narrowed down to 10. The 10 finalists will all have a photoshoot wearing the same dress provided to them by Bliss Couture. These photos by a professional photographer will be judged by a panel and will determine the top 5.

Step 6 - The top 5 will all be invited to be Bliss Couture Models on staff for live modeling, runway modeling, special events, and select vendor ads. The 5 finalists will walk in a runway show, wearing all new releases from Bliss Couture. A panel of judges will be present to determine the winner.

If you think you got what it takes to represent the outstanding designs of Bliss Couture what are you waiting for, apply today!