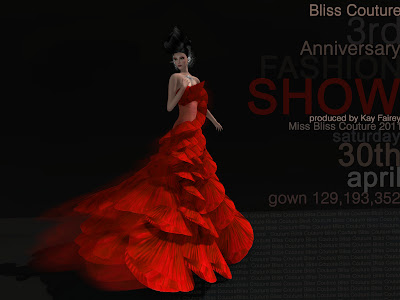 At the end of the intense month of events for its 3rd Anniversary BLISS COUTURE presents its Formal Collection. Welcome to the Home of Couture that will put the lights on some of its most famous gowns and new designs, worn with the elegant styles of BLISS COUTURE HAIR. Violently chic and infinitely alluring.

Amutey DeCuir promises sophisticated seduction for her formal show and she impressively manages to put us in the mood for high voltage couture action. Jewel colour inspirations of pink, blue and teal beside the ephemeral delicate pearl shades to shine this spring or welcome the hot season with the hautest wardrobe ever. Classic Bliss with serious sex appeal.

The luxury house welcomes again Kay Fairey, Miss Bliss Couture 2011 as Show Producer. The enchanting mannequin will delight us with another flawless runway event that will be held on Saturday, April 30th at 11am on the the flagship store's exclusive runway.

BLISS COUTURE would like to invite you to another beauty experience and hopes you will enjoy as we do.