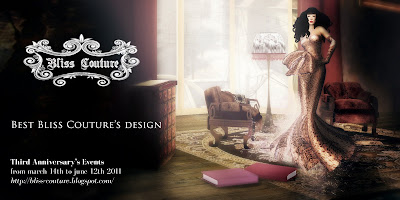 Bliss Couture celebrates its 3rd Anniversary with an intense month of events from Saturday, March 12th to Sunday, April 10th 2011.

We would like to invite all the Second Life's Fashion Bloggers to choose their favourite creation of the past three years of our label, including both the formal and basic designs and all the three collections (Bliss Couture, Bliss Couture Hair and Bliss Couture Basic).

Amutey DeCuir will select three posts with the best photography and styling. The three bloggers that better interpret the Bliss Couture's fashion concept will be awarded with the complete formal, hair and basic collections from march to december 2011 and the proposal to become official stylist and blogger of the brand.