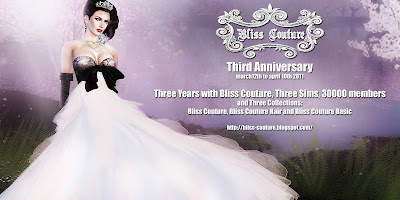 
What a woman wants, what a woman needs. Amutey DeCuir confirms her status as the woman who knows just what women desire with her breathtaking formal gowns, the enchanting dresses, the sculptural hair and the signature basic design. Refined and alluring, exquisite reminiscence and experience with renewed inspirations for the upcoming years.


The luxury label celebrates its 3rd Anniversary with an intense month of events from Saturday, March the 12th to Sunday, April the 10th. 2011 means three years of life for the fashion house that captures our dreams and makes them come true.


BLISS COUTURE would like to remember its Three Years of activity sharing all its enthusiasm with the numbers of Dolls, over 32000 (considering the inworld group and subscriber), and the opening of its third sim. After Hollywood Hills and Gown, Dress will be the new location created by the luxury house to present its design in a new contemporary and fashion surroundings.
BLISS COUTURE, BLISS COUTURE HAIR, BLISS COUTURE BASIC, beside the Bridal and the Cocktail Collections, and of course the Bliss Couture's Outlet will be hosted in the three renewed sims.


The Third Anniversary will be a special time of events that we are glad to announce:


___3rd ANNIVERSARY HUNT, from Saturday March 12th to Sunday April 10th.
A members exclusive hunt with fantastic gifts hidden in all the three sims of the brand. New surprises will be added randomly and announced in our blog, until the last week when more gifts will be at the new Dress Sim.


___3rd ANNIVERSARY LIMITED EDITION GOWNS.
The most beautiful couture pieces created in a special release on sale only during the Anniversary Celebrations.


___3rd ANNIVERSARY FASHION SHOW, on Friday April 8th.
The BLISS COUTURE's Spring Collection will be unvealed during the first show directed by Kay Fairey, Miss Bliss Couture 2011. The Event will be for sure one of the hottest appointments of the year for the presentation of the new dream designs, but also because it will be the first official presentation of the beautiful mannequin as the Face of Bliss Couture for 2011 and the top five finalists in our Models Group.


___BEST BLISS COUTURE'S DESIGN, march/june 2011
Blogger's favourite creation. All the SL Fashion Bloggers will be invited to choose their best BLISS COUTURE's design of the past three years. Three months to enter, from Sunday March 13th to Sunday June 12th, three bloggers will be awarded.

All the informations related to the 3rd Anniversary Events will be posted on Bliss Couture's Blog and also announced in our inworld group and subscriber.

It will be one month rich of emotions and also full of surprises, aiming to thank all the BLISS COUTURE's lovers for making this possible.