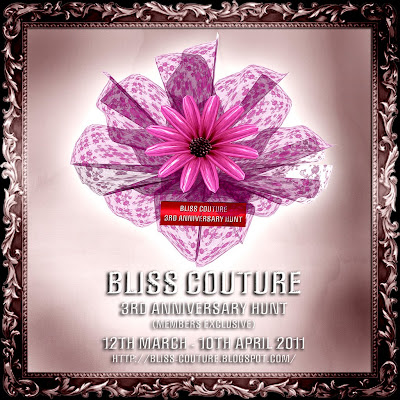 The luxury label celebrates its 3rd Anniversary with an intense month of events. 2011 means three years of life for the fashion house that captures our dreams and makes them come true.


Bliss Couture's 3rd Anniversary Hunt starts today, Saturday March 12th and ends on Sunday April 10th.
A members exclusive hunt with fantastic gifts hidden in all the three sims of the brand. New surprises will be added randomly and announced in our blog, until the last week when more gifts will be at the new Dress Sim.


The first item of the Hunt is out, you must find the pink lace box to get your gift. Good luck and happy hunting!


All the informations related to the 3rd Anniversary Hunt and the other Events will be posted on Bliss Couture's Blog (http://bliss-couture.blogspot.com/) and also announced in our inworld group and subscriber. 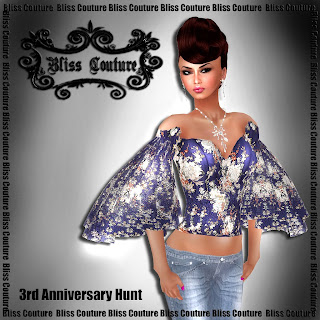