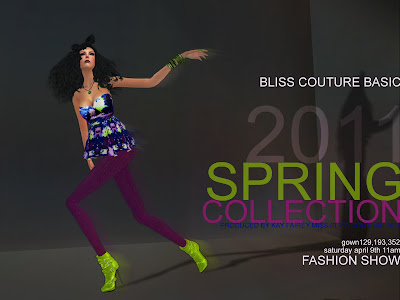 
During the month of its 3rd Anniversary the luxury label presents the new SPRING COLLECTION of Bliss Couture Basic.

The highlight of the intense time of events, with the 3rd Anniversary Hunt, the Limited Editions and the Best Bliss Couture's Design is the glamorous treat of the runway showing on Saturday, April 9th at 11am, of the new designs created by the brand that never stops surprising its lovers and making us dream with signature style.

The delightful revealing of the colorful inspirations will be hottest than ever as it will welcome Kay Fairey as Show Producer and Miss Bliss Couture 2011. The beautiful mannequin will also model for the first time on the exclusive location at the flagship store as face of the brand.

Bliss Couture would like to remember its Three Years of life sharing all its enthusiasm with its Dolls and thank them for making this possible.

All the informations related to the 3rd Anniversary Events are being announced in the Bliss Couture's Blog and also in our inworld group and subscriber.

ROBLOX is powered by an ever growing membership base of more than 300,000 creators who produce an infinite variety of highly immersive experiences.

These experiences range from 3D multi-player games and competitions, to interactive adventures where friends can take on new personas discovering what it's like to be a dinosaur, a miner in a quarry or an astronaut on a space exploration.