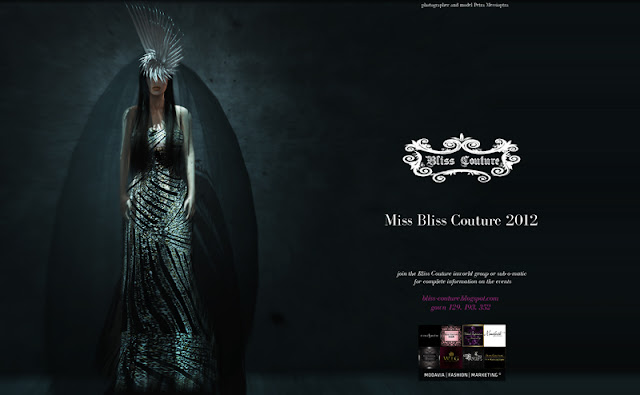 
Bliss Couture is glad to announce the finalists names of its model search third edition. Once again it's been an amazing experience to admire so much talent and creativity. The 60 semi-finalists have been called back for a live audition in the past days in front of a jury composed by our sponsors and they truly amazed us for their outstanding work.
We have been not able to select only 20 names as planned, so we have decided to invite 28 models to partecipate at the MISS BLISS COUTURE 2012 Final Event, that will be held in the end of july at the Modavia Fashion Centre. And here the list:

Congratulations to the stunning finalists for their flawless work and also to all the entries of the 2012 edition. You all made us proud and thankful.

Complete details about the finale will be announced in our inworld group, blog and Subscribe-O-Matic.

You can admire all the wonderful pictures of the entries in the MISS BLISS COUTURE 2012 Show Room.

MISS BLISS COUTURE 2012 Model Search would like to thank its sponsors for the great support and collaboration: