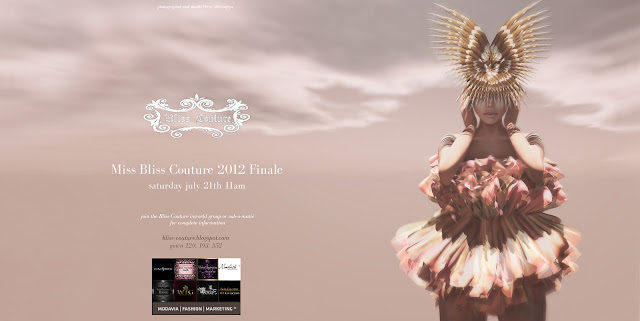 The long waited day has come. Bliss Couture announces the date of the final event of its third edition model search, that will be held on saturday july the 21st at 11am SLT at the Modavia Fashion Centre.

The fashion label pageant has started last march, and one more time highlighted the talent of so many entries. The best feedback for the brand is to have its collections worn with so much elegance beside the success for representing for third time one of the most popular SL model searches, and to admire the creativity and the beauty of the models that made the Bliss style as their own. They all gave a wonderful contribution to the event and we thank each of them for that.
Just a few, after the three months selection and the live auditions, will be in the finale. Only one will be  MISS BLISS COUTURE 2012 .

You are cordially invited to admire and support our enchanting finalists during the runway event in front of a dazzling jury composed by our sponsors and discover who will be the face of the label for the 2012.

The two finalists with the best mix & match outfit and the best visual appeal will be awarded with a 10000L gift card each from Bliss Couture, special prizes from our sponsors, and will receive an invitation to be Bliss Couture Supermodels and Stylists of the brand.

Complete details about the finale will be announced in our inworld group and Subscribe-O-Matic.

We are glad to remind you that you can read about MISS BLISS COUTURE 2012 here.

You can admire all the wonderful pictures of the entries in the MISS BLISS COUTURE 2012 Show Room.